Show/Hide
All indoor City facilities are closed to the public until further notice. Please visit www.roswellgov.com/coronavirus for information regarding the City of Roswell coronavirus response. 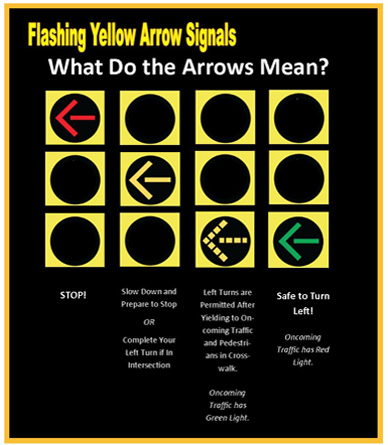 The Georgia Department of Transportation (GDOT) has installed a new type of signal along SR 92, SR 140, and SR 120. The new signal display includes a Flashing Yellow Arrow.

Flashing Yellow Arrow signals are fairly new to Georgia but are increasingly more common across the United States.

How do they work?

The Flashing Yellow Arrow signal will have three or four displays. They will replace the existing five display signal which includes two arrows and three solid signals. Refer to the graphic to learn more about the signal.

Why has GDOT made these changes?

The changes are a result of a national study conducted by the Federal Highway Administration, which showed the new signals help prevent crashes, move more traffic through the intersection, and provide more flexibility in traffic management. Recent changes in GDOT policy make this the preferred signal at new and updated intersections on the State Route system.

Why is the light staying RED at certain intersections?

The City of Roswell and Georgia DOT analyzes each intersection before any operational changes are implemented. Signal operations differ for each intersection based on Georgia DOT criteria and a number of factors such as safety considerations, configuration and number of travel lanes, available sight distance, and opposing traffic volumes. During certain periods of the day, drivers may see a RED arrow rather than a Flashing Yellow Arrow. The signal is functioning as programmed. This operation increases safety and reduces accidents. Engineers have evaluated and adjusted the signal timing to ensure there is minimal delay. An example of this operation is located at SR 92 and Hardscrabble Road.

Why is there not a Green Arrow at certain intersections?

Watch a video of how the Flashing Yellow Arrow signal operates courtesy of the Michigan Department of Transportation. (Opens YouTube in a separate window.)